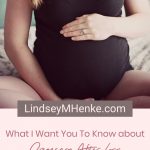 My first baby died. Yes, she died, after a perfect 40-week, full-term pregnancy. She died from an E.coli infection. Nothing could be done.

Then seven months after she died I was pregnant again.

When I looked down at the pregnancy test on that warm Minnesota July afternoon I did not jump for joy or quiver with excitement inside like I did with my first pregnancy test turning positive. No. I frowned, shrugged my shoulders, then threw the stick in the trash.  I was apathetic, indifferent to the possibility of carrying life again, because the first time I tried, I failed miserably.  Or at least that is what I thought.

This is how the journey started, and here is what I want you to know about pregnancy after loss.

The first three months that I tried to conceive after loss and got the negative pregnancy result, I would break down in tears. I thought that my only chance at motherhood had passed when my baby died.

When I finally got my positive pregnancy test I went numb. I showed the results to my husband, and there was no jumping for joy or tears of happiness like there was just 16 months ago. We looked into each other’s eyes and shrugged our shoulders, crossing our fingers that we would be able to bring this baby home.

At my first clinic visit my doctor said, “Congratulations,” and I winced as I thought, “What was there to congratulate me about? This baby could die too.”

As I reached the 12-week “safe zone,” I knew in my mind that there was no longer any “safe” part of pregnancy.

I didn’t buy maternity clothes until I was bulging out of my normal clothes, in fear that I would have to return them.  I also hid my pregnancy under baggy shirts and sweaters so I could avoid the heartbreaking questions, “Is this your first” and “How many children do you have?”

As the baby grew, so did my anxiety.  With each new kick I feared she would die too.  I didn’t want to attach, to get too close to her, just to lose her like I did her sister.

From 20 weeks on I must have visited the emergency department 15 times until I actually delivered the baby.  I was always worried that her movement had decreased or an infection had found me again, always scared that she would be taken from me too.

I had nightmares, constant anxiety, panic attacks and PTSD moments as I got closer and closer to delivery.  The longer she was inside of me the scarier it got.

After each ultrasound and NST test I would cry.  I would panic in the minutes before the tech placed the ultrasound wand on my round tummy, and once I left the appointment knowing baby girl was okay, tears of relief and fear would flow from my eyes in the car where I could once again grieve my baby that died and hope, but yet still fear, for this one’s life inside of me.

I didn’t have a baby shower.  I didn’t buy her clothes.  I wouldn’t let my husband bring the car seat to the hospital, because I didn’t want to bring it home empty again.

I would pray, even though I don’t believe in prayer.

I didn’t sleep in the nights and weeks leading up to her scheduled C-section.  For two months before she was born, I woke up every two hours to count her kicks and make sure she did not silently slip away in the night like her sister did.

As we drove to the hospital to deliver her I poked and prodded at her to keep her moving. I needed her to remind me that she was still there and that she would be delivered alive.

When I heard her scream a sense of relief washed over me. She was alive!  Alive! I remember turning to my husband and saying, “She is so warm.”  You see, my other baby was cold to the touch when I held her for the first and last time.

But that’s not the end of the journey. The anxiety of pregnancy after loss carried into the postpartum period and parenting after loss.

Two days after she was born I had a mental breakdown in the hospital–crying, having an irrational fit of anxiety and worry. I needed medication because I was at a higher risk for postpartum depression and anxiety.

I have postpartum anxiety. I have had it since before she was born, and 11 months later it was still there.

The fear of losing your child doesn’t go away after you get through the pregnancy after the loss.

For the first three years I would still check each night to see that she was breathing. I would panic when daycare called me at work. I would still mentally prepare myself for having to hear the words, “I’m so sorry. Your baby is dead.”

I will tell you that no matter how hard this journey of trying to conceive, pregnancy, and parenting after loss has been, in the end, the moments of joy outweighed the fear of losing again.

I just want you to know that pregnancy after loss is hard–the hardest thing I have ever done after grieving the death of my child. But, when my three-year-old daughter smiled at me and reached for hugs and cuddles, it made the horrendous yet hopeful journey worth it.

That is what I want you to know.

*A version of this article was originally published at Pregnancy After Loss Support.