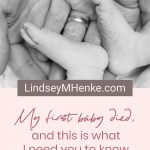 My first baby died. Yes, she died, after a perfect 40-week, full-term pregnancy. She died from an infection. Nothing could be done to save her. In one breath she was here, we were planning on delivering her and in the next, as the doppler on my bulging belly remained silent and the ultrasound still, she was gone.

“I’m sorry…” The doctor shook his head, “no heartbeat.”

Here’s what I need you to know…

With those words the room spun me forever into the land of upside down that I’ve been walking in since. Right and wrong no longer made sense as a sentence because she was SO right, just a moment before and in a split second everything went So wrong.

But there was nothing wrong with her. She was perfect. No health conditions. No reason for why she died. She died because, well, life isn’t fair that way. Babies die. Mine did.

This did not make me love her less.

When they put her cold decaying body into my arms I cried. Not because she was gone, but because she was here. Because her weight against my breast was the most love I have ever felt in my life. More than a first kiss or falling in love with your soulmate. Holding her, I was not repulsed as I feared I would be to hold a dead baby, but I was filled with love akin to knowing the secret of the Universe and it was placed in my arms. I was proud that she was mine. I was proud that she chose me.

I was broken, because everything before that moment did not make sense and everything that was to come I was terrified of. When she died it’s as if I died with her. Who I used to be was gone and the place where my soul used to be was replaced by a stranger I had just met – grief.

Leaving the hospital without a baby is one of the biggest betrayals the Universe can bestow on a parent.

I was promised a child to take home only to be given empty arms. The lightness of the unfilled car seat was a direct assault against the weight of her in my arms from the day before. Only adding insult to injury was the barren wobbly womb where she lived and died that was deflated and also longing to feel full once more. Like it had been, blooming with life, only 24 hours before. The juxtaposition of death happening in the space life was supposed to be born was and still is impossible for me to truly comprehend.

The empty nursery I passed after coming home from the hospital was like a punch in the gut. The diapers on the changing table, the onesies in the dresser, washed and ready to use would all collect dust as days turned into weeks they went untouched because there was no baby to wear them.

Those are the words that would have to be told to friends, family, coworkers, and clients, “Congratulations! How is the baby?” “How was maternity leave?” No baby. No baby. I would have to reply. Grocery store clerks and new client conversations went a similar way over the next many months of darkness as they never knew there was once a baby but their questions didn’t hurt any less, “How many children do you have?” “Are you thinking about having kids?” I have a daughter, I mean had a daughter? The once simple questions were so confusing now to answer.

“Time heals all wounds” and “everything happens for a reason” were other good intended attempts at soothing my wounds from strangers and friends. How does the saying go, “the road to hell is paved with good intentions.” I soon learned that these platitudes were wrong anyway…months and even a year later time had not healed my wound, even seven years later it is still there and just to be clear sometimes, most of the time, everything happens for no reason at all. What well-intended witnesses to my mourning did not know was that I didn’t want my wounds soothed. Yes, I wanted the hurt to stop but I wanted to learn how to carry it, because the one thing that became clear over time was that my deep grief was because of my deep love.

I posted photos of my dead daughter’s decaying form on social media and hung them in my home. I wrote about her and about how much I missed her. I created space for myself and for others who needed to be, surrender and do with their grief over losing their pregnancy and child. I joined communities that didn’t try to fix me by telling me, “at least you can get pregnant” or “you can still have another baby” but that instead validated my longing. Knowing that even if I would one day have a rainbow baby, that a rainbow was not a replacement.

Love never dies. It’s been seven years, almost eight since I held her ashen corpse in my aching arms. I’ve had two other babies since, who have grown into big kids. Neither one of them could ever be her or her, them. They are all their own unique beings that came forth through my womb. That is why I love them uniquely still to this day. My living children, and my dead one. For a mother’s love never dies, even when her baby does.