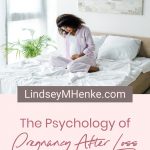 “When do you want to tell people?” My husband asked me as he laid in bed and watched me evaluate my reflection in the mirror while touching my 14-week pregnant belly. My clothes had become tight around the waist, to the point where I could no longer hide my second pregnancy from the world under baggy blouses. Yet, I still refused to buy maternity clothes in fear that it would jinx the longevity of this pregnancy. We had passed the 12-week “safe zone,” and he had been wanting to know when I would be comfortable announcing our second pregnancy, the one that followed our daughter’s stillbirth, to our extended family, friends, and of course on Facebook.

This is how the psychology of pregnancy after loss works.

It’s a constant tug-a-war between wanting to and being expected to devolve into a state of joy about expecting again, while simultaneously being consumed by fear and worry that this pregnancy will end too–like all the others did. While also grieving all that you have lost that came before this pregnancy.

It’s a dualistic reality that is difficult to live in. In one breath, you are grateful for this pregnancy, while in another you can’t wrap your brain around why you get to keep this pregnancy and not the one that came before. It’s not only a challenging time physically as you are growing a new human, but it’s then compounded by the complex emotions that disorientate you emotionally.  These emotions that come after a pregnancy loss, multiple losses, or years of trying, only to have your heart broken each month.

In the United States alone, 1 out of every 4 pregnancies end in miscarriage, and 1 out of every 160 pregnancies end in stillbirth, while 1 in 8 couples struggle with infertility. Research shows that a subsequent pregnancy is common in these women, and 50-80% will become pregnant within the first year after a loss. The complex psychological experience of a pregnancy that follows a loss will be had by many. But, this emotional experience is often invalidated by well-meaning family and friends who perpetuate the worst common myth about pregnancy loss–that a pregnancy that follows a loss fixes all the other losses and takes away the pain they left behind.

The truth is that being pregnant again after a loss is hard work, physically and emotionally.

Once you are pregnant again, the pain of your previous losses doesn’t go away. In actuality, sometimes it feels more intense because being pregnant again reminds you of what you have been mourning. It’s often difficult to trust your body to create and carry life again when you feel as if your body has failed you by making it extremely difficult to become pregnant in the past or not protecting and sustaining life growing instead of death growing there.

The joy of expecting again then becomes dulled by the pain of the previous losses and the fear that it will happen again. Because of this, you emotionally detach from connecting to the life growing instead of you. Not because you want to, but you feel as if you have to for survival. Then the guilt sets in. Guilt because you are pulling away from the joy of this pregnancy as well as guilt for loving this baby, because it feels like you are betraying your other baby, or babies, that died.

There is no cure for the complex emotions that accompany a pregnancy that follows a loss.

But there are “tools’’ in the form of building a support system that understands, learning how to practice self-care and self-compassion on the harder days, as well as living each day in the present moment. Telling yourself that today, in this moment, my baby and I are okay. That is really all you can do, besides the final fix that all moms pregnant after a loss will tell you might take away their worries and ease the pain – placing a healthy, living, and breathing baby in her arms. And, even that does not take away the grief. That will be something we carry forever.